What are the very best kinds of mistakes to learn from? Someone else’s!

I’ve had hundreds of conversations with clients about what they would and would not have done differently after working in their new practice space.

I speak regularly with subject matter experts in

as well as with other

keeping my knowledge and skills up to date and on the cutting edge.

What a difference the Expert Advantage makes: 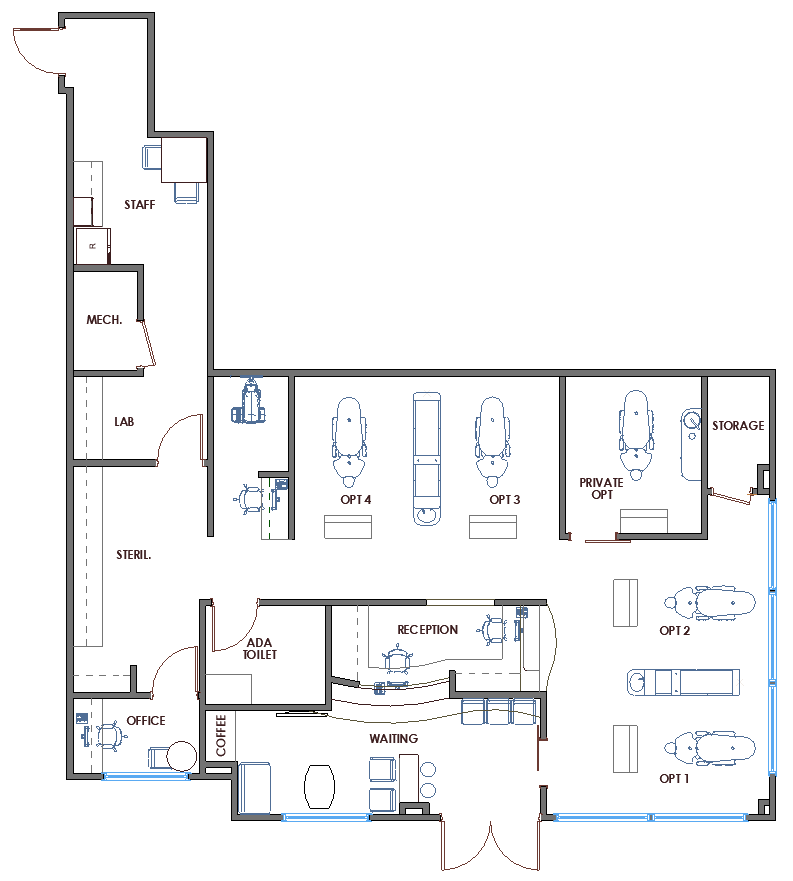 Doctor Liu came to me with a free space plan from a dental equipment company for help with selecting finishes and designing the lab and sterilization workflows. This was her start up dental practice in San Jose, CA and she was feeling overwhelmed with all the decisions to be made.

When I met the contractor at the jobsite to discuss some concerns I had with the plan and confirm the existing conditions, I found that the equipment company plans were over two feet larger (left to right) than the actual conditions across the clinic and over a foot in the already narrow staff and lab corridor.

Absolutely everything needed to shift!

And in a suite this size, you can see we were in dire straights.

While the circular flow was a sad loss, starting over with a new suite was not an option, the lease had been signed and the space was clear and ready for framing.

She thought she would have to lose an operatory. But we were able to redesign the space, keeping the private room and four opts, making better use of the space, increasing sterilization so that it would handle her volume of processing, and keeping the public spaces feeling as spacious as possible, and away from the working spaces of the sterilization, lab, staff and doctor’s areas. 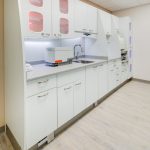 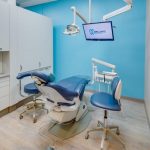 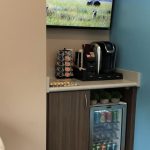 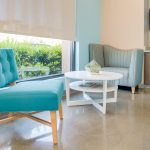 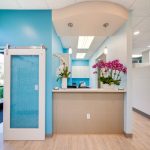 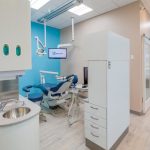 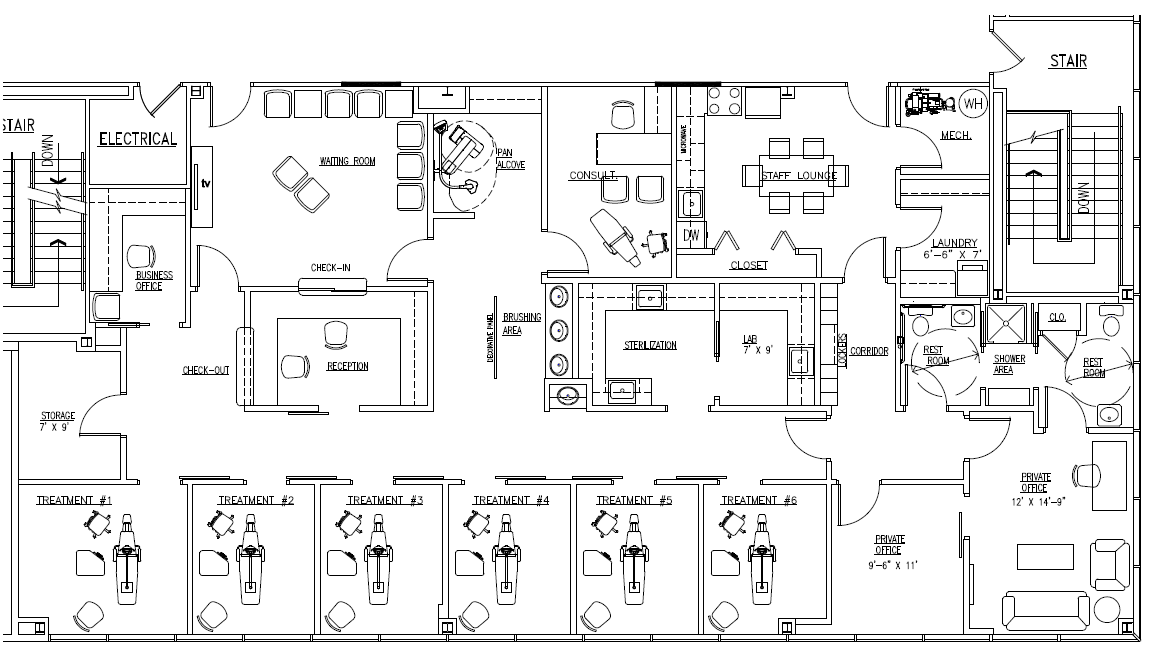 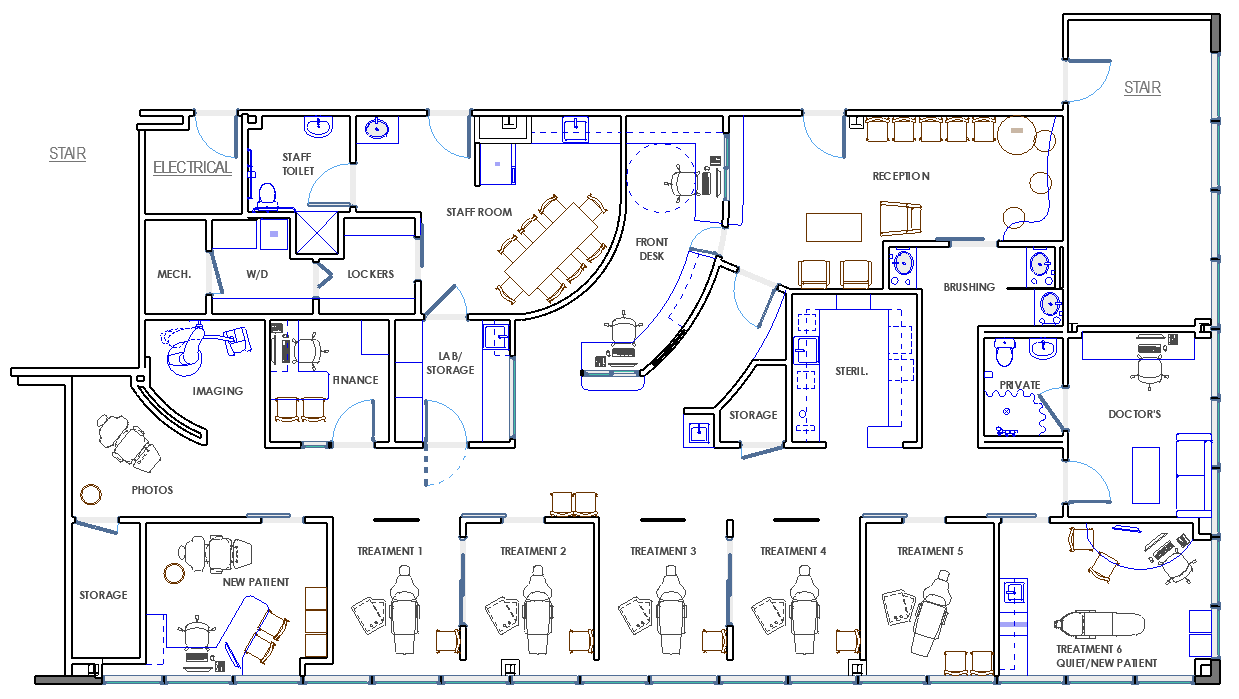 Doctor Jones is building her forever office and she wants something a little different. She wants to be able to take care of herself and her staff as well as she takes care of her patients. A comfortable doctor’s office with a room she can use when her children come and beautiful staff room with all the amenities.

Her lab is going digital soon and will be a display piece to show off her office’s state of the art approach to orthodontics.

With COVID in full swing, and because she is providing more personal and concierge service, she wants the flexibility to have every treatment room feel private with top notch infection control without throwing the feel of an open bay out with the bathwater.

Her local architect was not getting any closer to her dream after many iterations and she was recommended to me by one of her equipment supplier.

Using a combination of sliding glass doors and full and partial walls we were able to create the perfect ortho bay for her practice.

Using her limited space to the fullest, her hallways became shorter and more functional, graceful curves welcomed new patients and provided easy check out and exit for existing patients. Brushing remained private but connected to the waiting area since she prefers to work without an On Deck area.

And a multi purpose private treatment area can serve beautifully for, Observation, Pediatric Quite Room, Overflow TC Room, Family Treatment. or as her own Consultation Room or her children’s Homework Room. 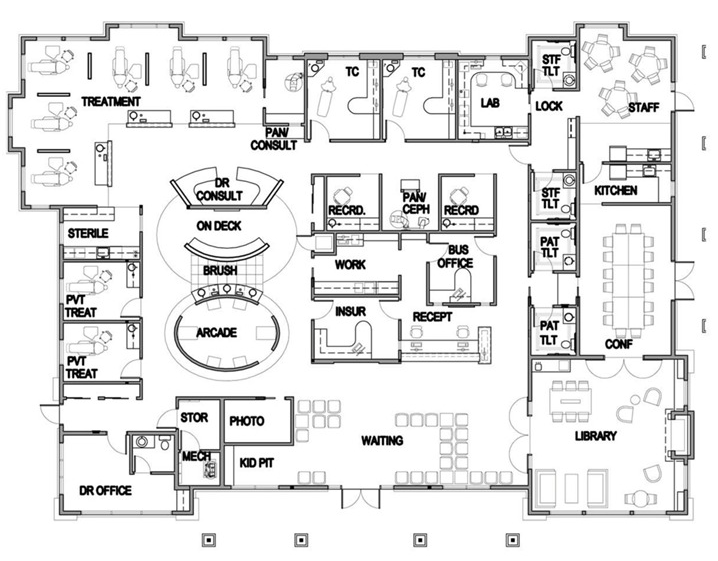 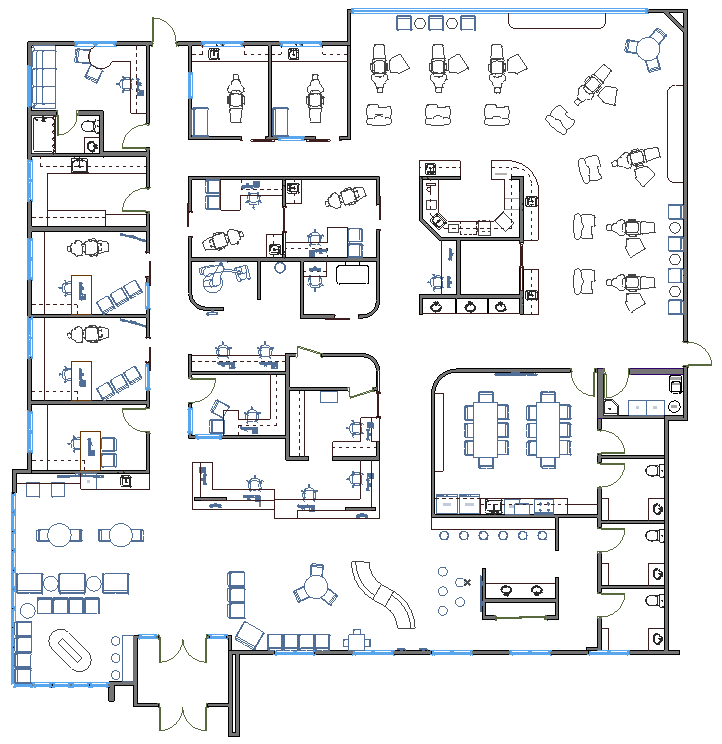 Doctor Johnson worked with a local architect with minimal Specialty Dental experience and was getting nowhere fast.

He had purchased a piece of property and was finally ready to build his flagship office, with plenty of space for his large and growing practice.

The building the architect was working on kept growing and growing but the clinic just didn’t function the way the doctor needed.

When Dr. Johnson came to me he gave me free reign and we hired a shell architect to join the team along with the contractor he already had on board.

We reoriented the building so that the clinical areas could face North and East for best light throughout the treatment day.
We opened up the treatment area, deciding to keep his rear delivery where he and his team were comfortable working.

To the right side of the building we designed a large addition for future growth adding another 6 treatment chairs, an associates office, an arcade pass through from the existing waiting room (moving one bathroom back to back with the exisiting) and a large new Storage Room.

The doctor decided he did not want to use an on deck but made space available for parents and siblings to come back to the bay. He also made sure to have a preparatory brushing station and a station to send patients to close to the clinic for brushing mid treatment.

His Doctor’s Perch tucked into a more private hall and both the new patient suite and the open bay got easy access to Imaging.

Private Treatment Rooms and Records/Observations Rooms could be shared depending on time of day needed for the new patient flow or the treatment flow. 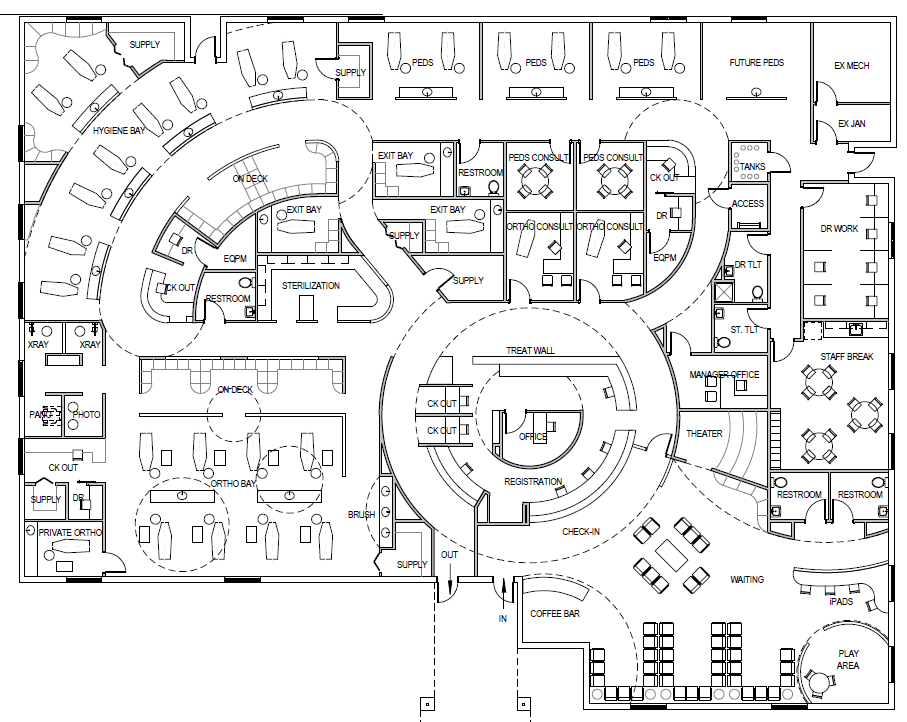 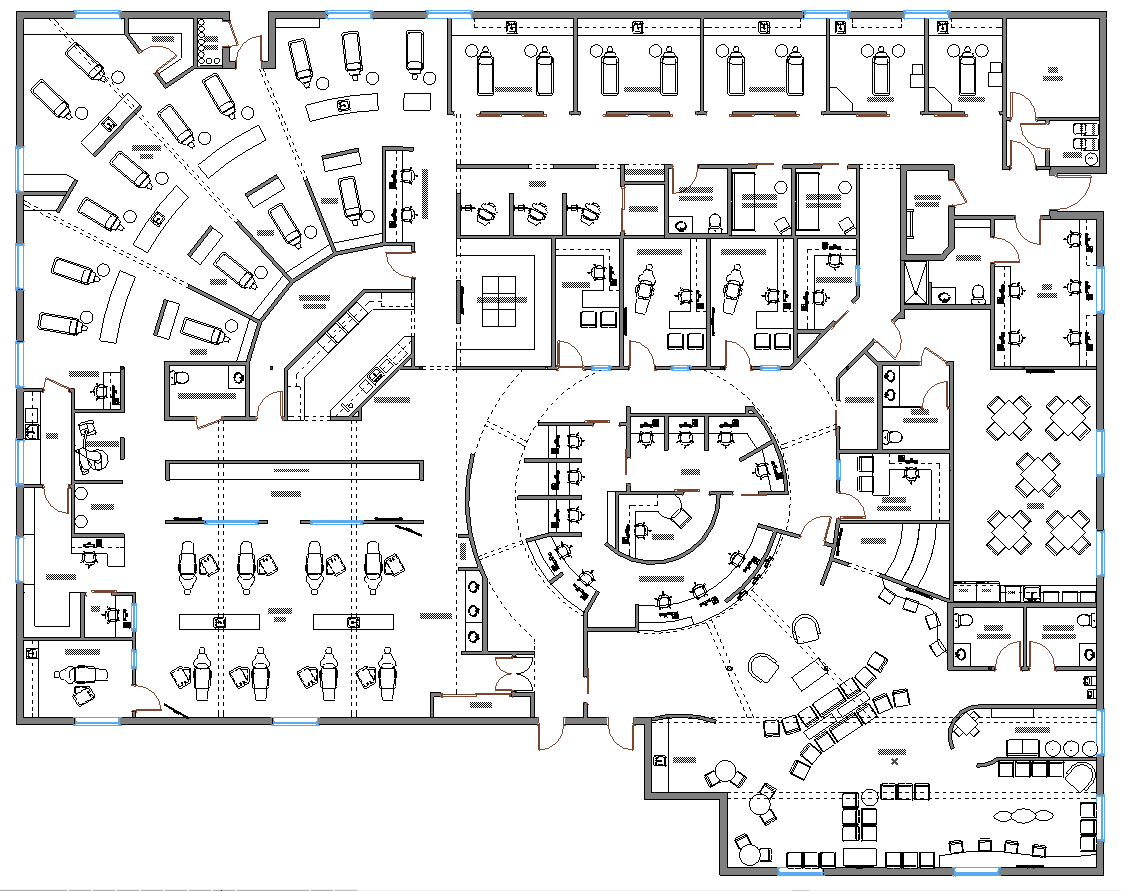 PDGO, A four doctor partnership of Pediatric Dentists and an Orthodontist worked with a local architect on their seven thousand square foot flagship practice. This was an existing building with great visibility in the community but, like all doctors, they had a program that was larger than the available square footage.

When they came to me the project was struggling through many iterations that were just not working and they were concerned about budget.

I asked them to have faith that we could design in everything possible and then work together with the builder to value engineer the project so that it would fit in their budget.

Together we walked a path keeping some of the graceful curves they liked in the architect’s plan while keeping building costs under control.

We increased the functionality of the space by more clearly defining where their bottle necks in patient flow would be. We made room for functions like incoming and outgoing calls without impacting the work at the Front Desk and at Check Out Stations. We created spaces adjacent to the clinic for doctor Exit Checks that would not hold Hygiene and Treatment chairs longer than needed and so that doctor’s time could be used efficiently.

We also increased the amount and usability of Storage Rooms.

We planned for future additional Oral Surgery services with a wide back hall, larger doors and direct private exiting out the back of the building. With two Sedation and Recovery rooms along a dedicated Treatment and Imaging hallway.

In the end we were able to save the doctors nearly $400,000 in through value engineering: changing curved walls to facets, replacing materials, fixtures and furnishings with more cost effective options, removing items from the plan that were not needed or could be added easily in the future, or simply changing manufacturers to get similar items at better prices. 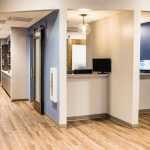 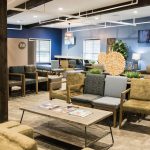 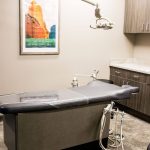 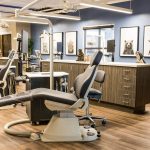 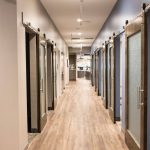 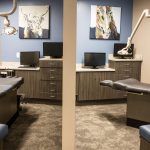